Sunday was Mark Twain’s 179th birthday (honestly, how did I ever know stuff before Twitter?). I’ve been a Twain fan since 7th grade, when I read Huckleberry Finn for the first time (and decided maybe I wouldn’t die of boredom in English class, after all).  Twain’s snarky, satirical commentary on American society is pretty brilliant.

Mark Twain is exhaustibly quoted, and for good reason — he could turn a phrase (or deliver an insult) like few others.  And of course, he had words about wine!

Sidebar:  Twain was a prolific cigar smoker, but there’s not much information out there regarding Twain’s favorite drink.  Some say Twain wasn’t much of a drinker at all.  Some say he was a bourbon man, others say pisco was his poison, and still others make a case for absinthe. Anyone know a Twain scholar??  I’d love a definitive answer.

Anyway . . . I came across these Twain words in Kevin Zraly’s book, Windows on the World Complete Wine Course: 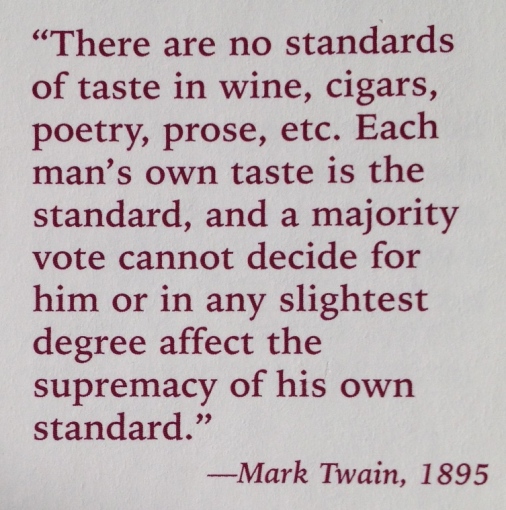 Hello, wine mantra!  Twain’s words really strike a chord — because wine is inherently personal. I don’t pay too much attention to the critics (or the shelf-talkers that anoint a wine with a high score).  At the end of the day . . . trust your palate.  Drink what you like, and like what you drink.

Ernest Hemingway once said, “all modern American literature comes from one book by Mark Twain called Huckleberry Finn.”  And on that note, I think I’ll pour myself a glass of Pinot Noir and re-read that treasure.

Wow. I’m gonna need a minute to get my life back together after the stress of the last few chapters of this book. Finished this last night and could *not* get to sleep. Set in the Mississippi Delta in the years immediately following WWII. Family, love, friendship, betrayal, racism, demons. It’s got it all. Deeply uncomfortable, deeply meaningful. Beautifully written. “What we can't speak, we say in silence.”
Walked to our local farmers market this morning. Did a lot of sweating. I am not good at summer anymore. Went to the thrift store. Found a new addition for my vintage coupe glass collection. Had to buy the whole set, though. Too fabulous to pass up. $8 for 8 glasses, so fine, the whole set(s) it is. I don’t need that many glasses, but my brother is starting a vintage coupe glass collection. He doesn’t know that yet, but he is. Still cleaning out closets. Found 3 more rolls of scotch tape. Seriously.
Started cleaning out a closet this afternoon. A closet that should be on an episode of Hoarders. Why do I have 18 rolls of scotch tape?!? Was making great progress purging stuff. Brings joy/no joy and all that. Then the wicked storms came through, and we lost power. Piles everywhere. Just tripped over a pile of no joy. Momentum gone. Felt kinda pouty, so I opened a bottle of wine that should have been good. It sucked. Like *woof* bad. So now I’m sitting here in the dark, drinking a glass of Plan B — the 2019 Trilogy red blend, from Flora Springs in Napa Valley. BIG stuff - ripe and approachable, yet abundant structure. Beautiful. Plan B > Plan A. Feeling less pouty now. Might go read by flashlight.
Both kids home for dinner tonight (one a surprise!), sous vide steaks, and a classic @rdvvineyards 2010 Lost Mountain. Happy Fathers Day!